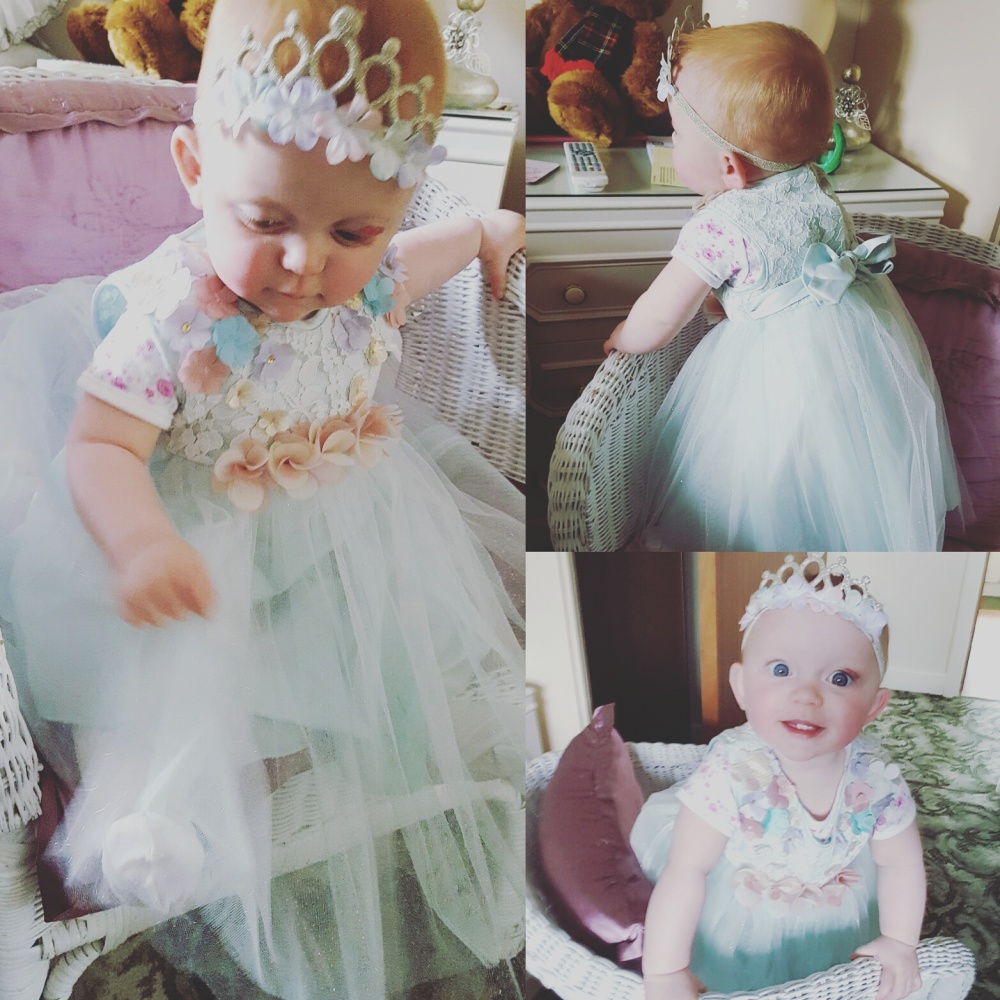 Last weekend my beautiful cousin got married. At 10 months, it was also Lily’s first wedding, so inevitably we packed as though the apocalypse was coming. Toys, books, food, snacks, nappies, change of clothes… and having travelled to Weymouth from Leicester, and the fact I love my cousin to bits so didn’t want to cause a ‘scene’ on her big day, I’d triple checked everything ‘just in case’. Well, we didn’t need 90% of it, but at least it was there. 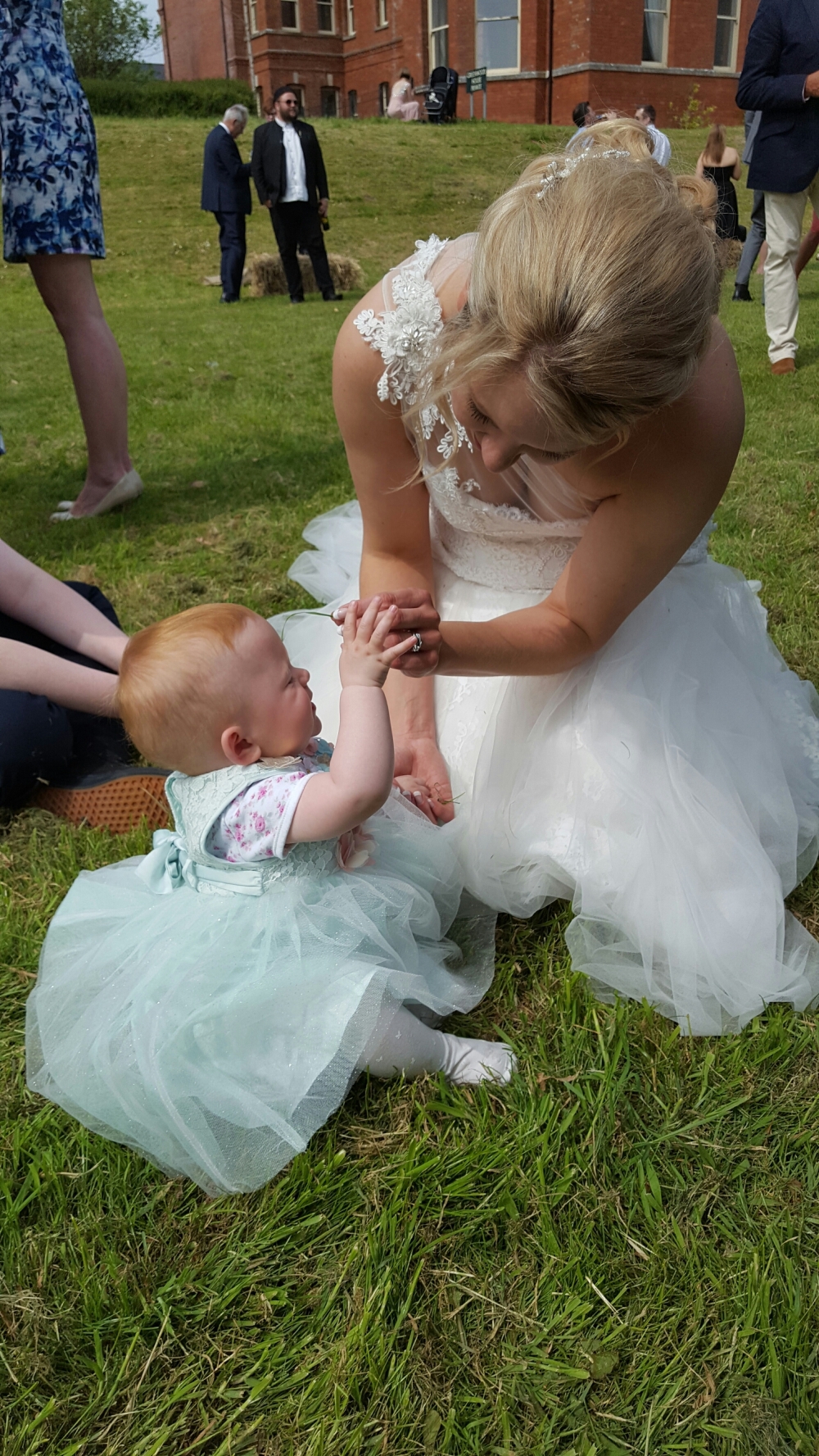 1. The ceremony
Inevitably, our perfect timing to get there early so we could give Lily a pre-ceremony nap was a bit of a failure. We amazingly manged the ‘get there early’ part, but clearly the scheduled nap time wasn’t going to happen. She was far too nosy, so was completely exhausted by the time the ceremony started. (We were in fact all exhausted thanks to the 4.50am sunrise blazing into our B&B room, thus telling Lily that it was daytime!)

That’s when the nerves kicked in, convinced she was going to kick off during the ‘I do’s’. We set up camp at the back to enable for a quick getaway if necessary.

Thankfully she’s a nosy (some call it inquisitive!) baby, so she got a second wind, and was quite happy smiling at all the other children, squealed with delight when the bride and her party entered the hall, then quite happily entertained herself with the ‘Order of Ceremony’ card through the vows… until she decided it was nutritious and so we had to exchange it for an emergency carrot wafer.

2. The photographs
Next up was the photographs with drinks and music, so we used this as an opportunity for that much-needed nap. Thanks to the quiet, beautiful little Dorset village and the nice weather, we snuck in a half-hour nap (well Lily did, not sure i’d have got away with that!) before rejoining everyone for the much-needed drinks.

Plenty of cuddles with family meant I actually got relieved of carrying around an 8kg baby for a while, and Lily seemed quite happy about that too. Coupled with the lovely entertainment laid out for the little ones, we still hadn’t needed to enter the emergency Apocalypse Bag. 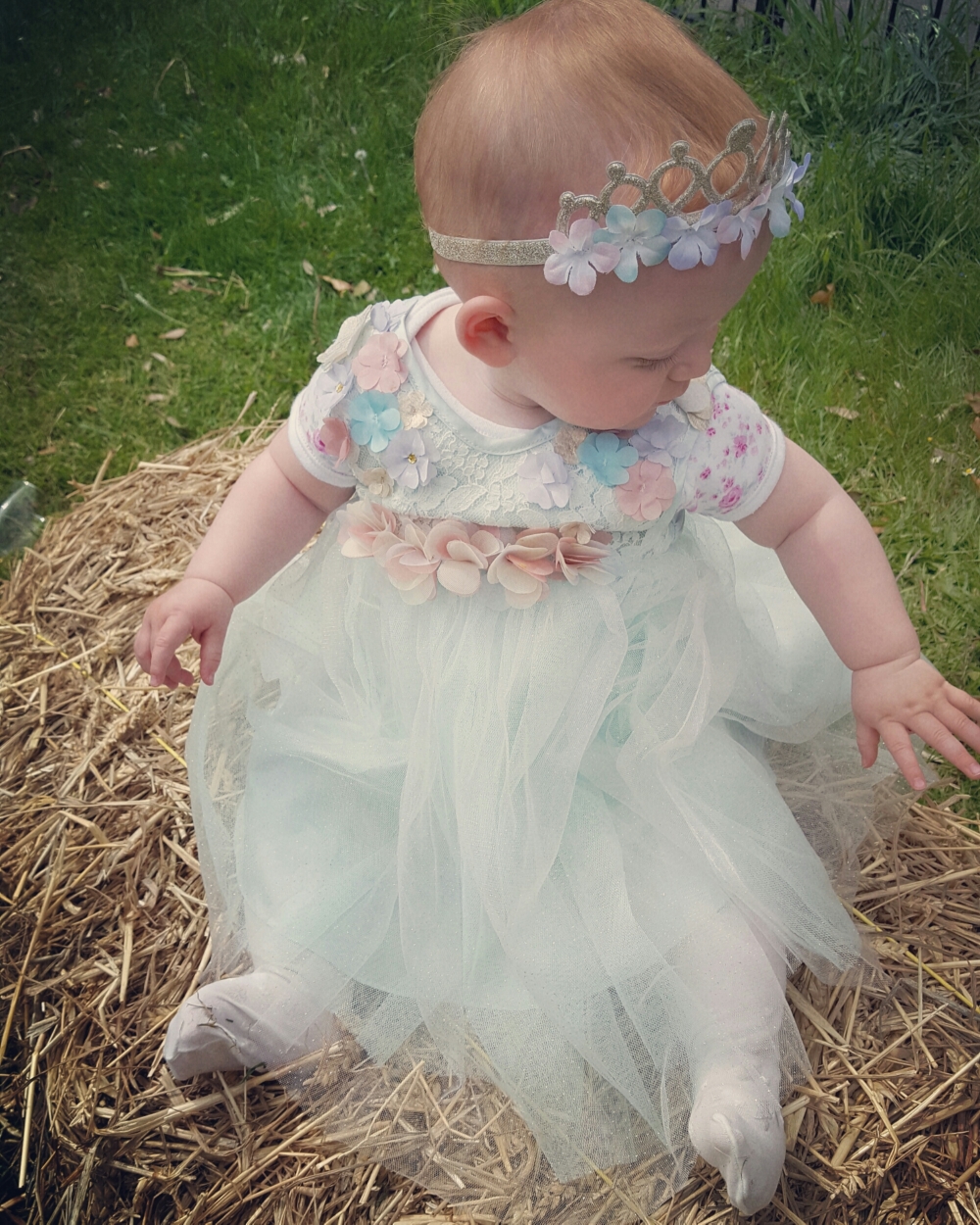 3. The outfit
It was at this stage I learned the positive and not-so-positive sides of my outfit choices. Generally surviving in jeans, Vans and a hoody, or gym kit, means girly clothes are alien to me as it is. Thankfully I stuck to flat sandals (thanks Primark!) as I’m unbalanced in heels as it is, let alone with a human in my arm, and a grassy bank to either sink into, or, even worse, roll down. The hair was tied back due to Lily enjoying pulling any loose strands, and I had a wrap-around bag to store not any makeup or girly things, but a baby water bottle, baby apple rice cakes, and a muslin cloth. This freed both hands for wriggly-baby control. I was also comfortable in my dress until realising Lily prefers to be on her feet, so with me holding her I was very conscious of the potential boob-fallout.

As for Lily’s outfit, it was clearly going to cost more (thanks Grandma!) than my entire attire combined. Her fabric headband didn’t last long and thankfully we only picked up her shoes from Tesco as they didn’t make it to the venue on her feet! At least she looked pretty cute, even though being a very wriggly baby she was a nightmare to hold in it, and her tights picked up all the grass! Just remember to factor in time for BOTH of you to get dressed! 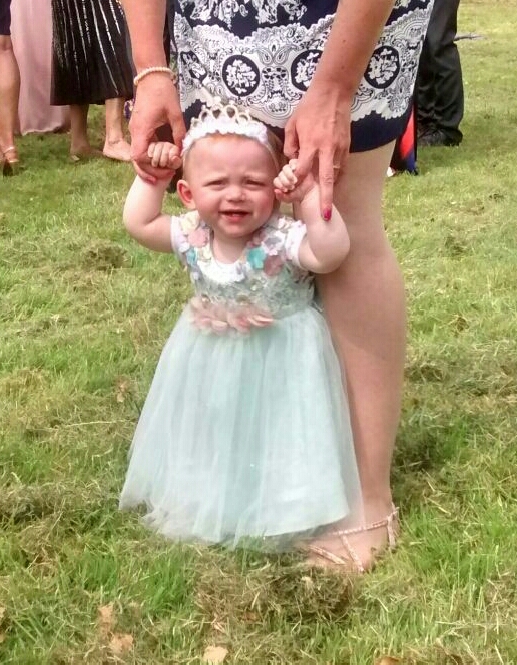 4. The speeches
She pooped. To avoid putting people off the upcoming buffet, I made a swift getaway to the baby change…

5. The meal
The buffet queue gave us an opportunity to feed Lily before our own food. I chose a sweet potato, carrot and swede mix that would avoid the inevitable mess that something like spaghetti bolognese makes. Then during our own meal she happily sat in the highchair with a lovely book she was given (again, something else we’d brought but not needed!!) then played with anything else she coukd get her hands on (particularly the little boxes of wedding favours and cardboard name tags!). When she became a little restless we had plenty of willing hands to give her cuddles and so we got to enjoy the amazing buffet, knowing Lily was in safe hands. 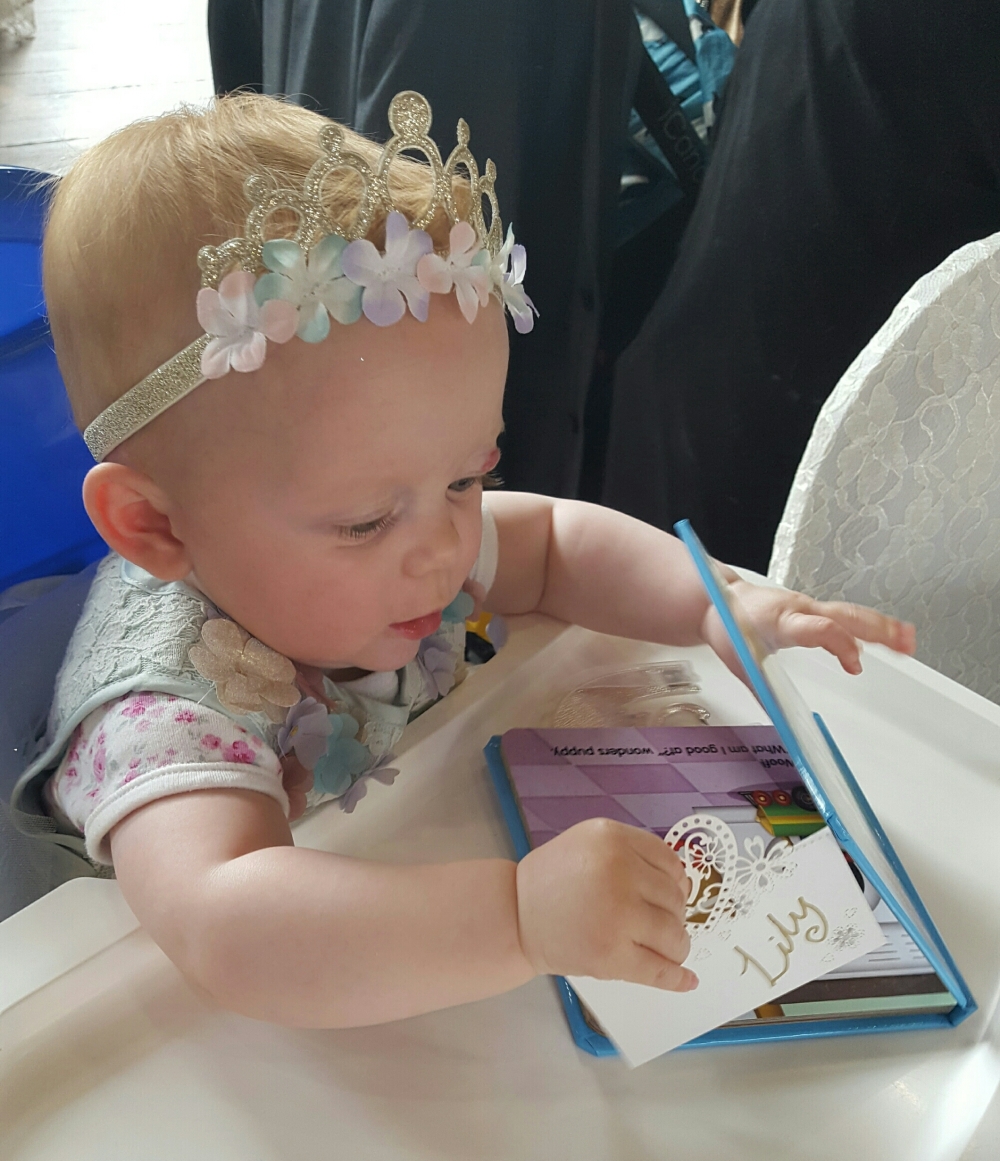 6. The end
The evening entertainment was shortly due to start and by this stage Lily was getting tired. It was close to her bedtime and we were half an hour from the B&B. We also have a poorly Nana who was unfortunately unable to make it to the wedding due to having become bedbound with progressive dementia following strokes. She rarely gets to see Lily anyway so we got her dressed for the wedding at her flat, and decided once it was close to Lily’s bedtime we’d bring Nana back some cake from the wedding and show her the lovely photos. It also meant she could get some more Lily time, before we were to head back to Leicester the next day. 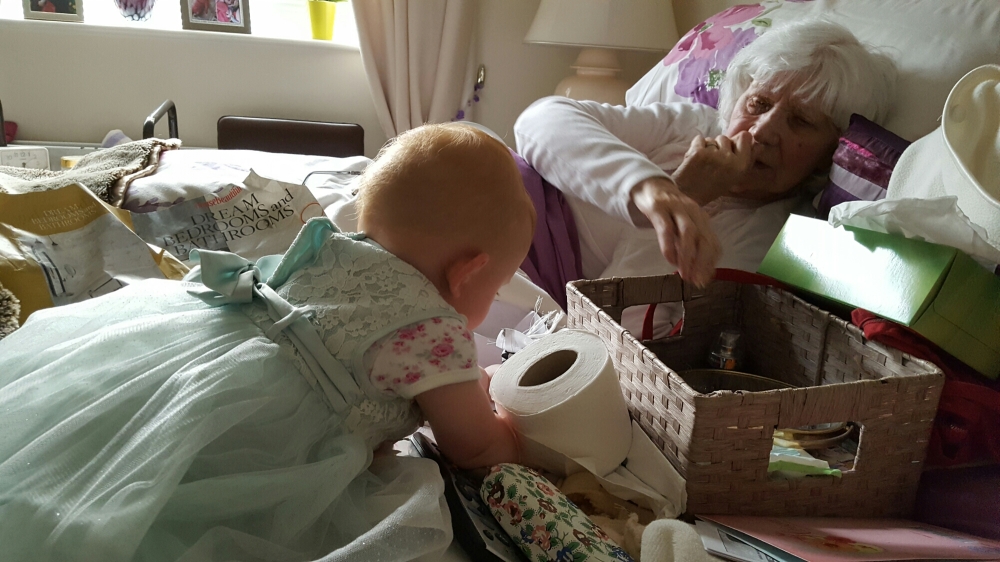 The wedding was beautiful, my gorgeous cousin and her new husband were stunning, and it was a perfect day for them, as well as all the guests. I know the evening celebrations would have been fantastic but I guess we have to make sacrifices with the little ones. Plus we got to spend some extra rare time with Nana… even if Lily was close to grabbing her false teeth!

We are now about to vacuum the pram from all the crumbs, sand and dress-glitter she collected for us this weekend! Just next time I maybe won’t pack an entire Trunkie for just one afternoon, will have more faith in a 10 month old to last a ceremony, won’t rely on her to nap pre-ceremony, and won’t choose a baby dress a few months in advance that she was very close to growing out of by the day of the ceremony… plus will probably get some advice to find myself a less potentially boob-problematic dress! 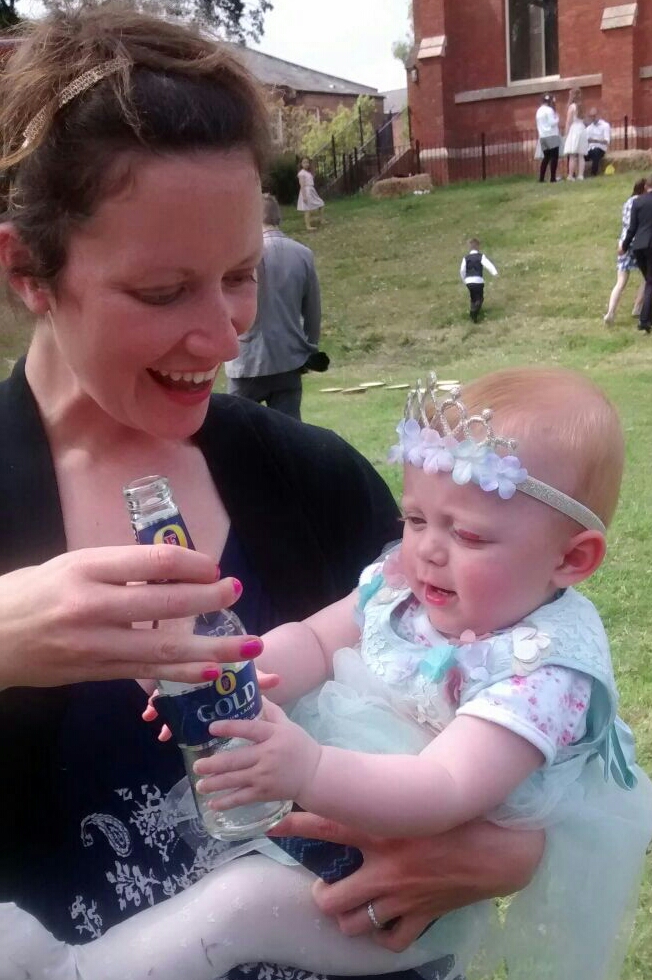